Effects of Snoring and Sleep Apnea

The negative effects of snoring and sleep apnea (apnoea) are many and varied.

At the ‘social’ end of the spectrum, snoring can be a severe embarrassment to the snorer and often disrupts other people’s sleep. Negative impacts on conjugal relationships are not uncommon, with ‘separate room’ sleeping arrangements becoming a way of life for many snorers and their partners. In some cases, snoring has even lead to the breakdown of otherwise happy relationships.

At the ‘medical’ end of the scale, snoring and sleep apnea inevitably disturb the sleeping patterns of the snorer and their partner and thus deprives them of necessary rest.

One result of this is the fact that sufferers of 'sleep disordered breathing' (SDB) are up to 7 times more likely (than a healthy sleeper) to be involved in a motor vehicle accident.  This is why licensing authorities in all Australian States and Territories specifiy 'sleep conditions' as a notifiable condition, along with blindness and epilepsy.

Untreated sleep disorders could mean revocation or restriction of licence, but effective treatment avoids this.  See the section on 'Are You Fit To Drive?' for more details.

Snoring is indicative of the development or existence of a more serious sleep disorder.

Snoring is the sound of someone struggling to breathe.  The soft tissue of the upper airway sags and reduces in size.  Breathing becomes more laboured as a result, and the vibration of the soft tissue creates the snoring noise.

As we age, lose muscle tone and put on weight this can grow worse, utlimately to the point where the airway is blocked, known as obstructive sleep apnea.

The consequences of 'sleep disordered breathing' (SDB) are summarised in a report by the Queen Victoria Hospital Sleep Studies Unit (in the UK), which said:

“If snoring worsens, it may lead to disrupted sleep. The subject wakens in the morning with a feeling of having slept poorly, and finds the day is difficult to cope with due to tiredness and lack of energy. In extreme cases, they fall asleep in any given situation, even during conversation, and most dangerous, when driving.

It is likely that many road accidents, particularly those on motorways where boredom sets in, are caused by going to sleep at the wheel, and this should be taken very seriously by those with this problem.

Thus, a 'slobbish' syndrome develops where there is decreasing exercise, increasing weight and a lethergic attitude to life.”

Unfortunately, it can get much worse. According to a Position Statement of the Academy of Sleep Medicine:

Similar results were reported in studies conducted by BUPA. (BUPA is the British United Provident Association - a global healthcare organisation with members in nearly 190 countries.  The BUPA Foundation is an independent medical research charity that provides finance towards the prevention, relief and cure of sickness and ill health. )They state:

“Your breathing stops, cutting off the flow of oxygen into your body and reducing the elimination of carbon dioxide (CO2) from the blood. Your brain detects this rise in CO2 and briefly wakes you up, re-opening your airways and re-starting your breathing. This process can be repeated several times during the night. Proper sleep may become impossible, resulting in severe fatigue and a decreased quality of life.

Sleep apnoea in adults can increase the risk of serious health problems such as heart failure, because it deprives the sufferer of adequate levels of oxygen, making the heart work harder than normal. Obstructive sleep apnea is serious if the episodes last more than ten seconds each and occur more than seven times per hour. Apnea patients may have 30 to 300 such events per night. Blood oxygen levels may fall, causing the heart to pump harder. A myocardial infarction (heart attack) is possible.

Effects on the patient:

These findings have been confirmed by a recent study at The Alfred Hospital's Sleep Disorders Centre (in Melbourne, Australia). The study confirmed a clear link link between snoring and heart disease and claimed that it could be as serious as smoking or diabetes. The study was published this year in the American Journal of Respiratory Critical Care Medicine.

Snoring arising from the base of the tongue can cause partial or complete airway obstruction due to a collapse of the throat, which is essentially a muscular tunnel. If the muscles relax too much, the walls of the tunnel fall in and this inhibits inspiration (breathing in). There may only be a partial collapse, but the effect nevertheless is that the muscles of breathing have to work harder to drag air into the lungs past this obstruction.

Where complete cessation of breathing occurs the condition is called Obstructive Sleep Apnea (OSA). Cessation of breathing may last anywhere from at least ten seconds to two minutes or more. Apnoea patients may experience up to 300 such events per night. These episodes often lead to significantly reduced blood oxygen levels.

OSA can lead to severe fatigue at best and sudden death at worst. If you think you have this disorder, you should seek treatment from a medical professional.

According to various scientific studies:

Once again, the good news is that there are a variety of effective treatments available for sleep disordered breathing. For information, call 1300 246 637 for a free, no-obligation chat with a friendly Care Coordinator. Alternatively, just fill in the form below and we'll get back to you promptly. 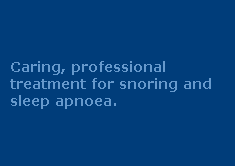